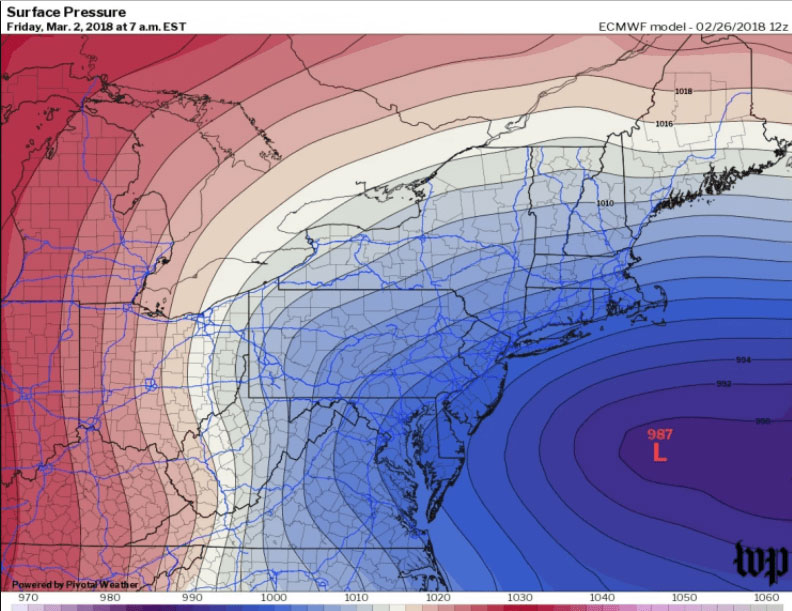 Power outages climbed to more than 200,000 utility customers across Maryland, airports reported flight delays, Amtrak halted Northeast Corridor service and school districts canceled classes Friday as wind gusts reached 70 mph with the arrival of a nor’easter in the Baltimore-Washington region. As the storm strengthened it reached the category now known as a bomb cyclone, with gusts up to 60 mph at 10 p.m. Maryland Gov. Larry Hogan declared a state of emergency Friday evening. Authorities warned of dangerous driving conditions, projectiles that could injure pedestrians, power outages from fallen tree limbs, and broken windows from flying debris.

BGE said that its crews had restored power to 175,000 customers across the state by 10 p.m. Check for updates on the BGE outage map. PEPCO showed 215,844 customers in Maryland and Northern Virginia had no electricity, and the Maryland Emergency Management power outage map was also down. The Baltimore Sun reported a total of 200,000 power outages had been reported by Friday afternoon.

At least two tractor-trailer trucks were flipped over on the state’s bridges Friday by the fierce winds. The Chesapeake Bay Bridge was closed for an hour, reopened and closed again, a condition likely to repeat until winds calm. The Hatem Bridge was temporarily closed Friday afternoon because of a downed tree. Officials reported all lanes on US 40 at the Hatem Bridge were closed.

Wind speeds could top those that Superstorm Sandy brought to the state in October 2012, forecasters say, which were in the 61 mph range. “Isolated wind gusts could reach 80 mph, particularly at higher elevations west of the Interstate 95 corridor,” the weather service says.

Hogan declared a state of emergency beginning Friday, March 2, in the wake of damaging winds resulting in power outages, downed trees, and dangerous travel conditions across the state. The executive order will allow the state to coordinate support and help local jurisdictions. Dangerous conditions may continue throughout Saturday, March 3.

“I want to caution all Marylanders that these dangerously strong winds will continue this evening and into tomorrow. We are continuing to see a number of serious accidents on bridges and roadways, and power outages throughout the state,” Hogan said. “Please use common sense, heed all warnings, and stay inside and off the roads if possible.”

Amtrak service has been suspended between Washington, D.C. and Boston because of the fierce winds, although trains en route will continue to the nearest station. Amtrak Keystone Service is also temporarily suspended until further notice. All trains currently operating along the Northeast Corridor will continue to the nearest station. Passengers with travel plans also can confirm their train’s status, change their plans or review refund information on Amtrak.com.

Wind speeds of 40 and 60 mph were common across the state at 6 p.m. While gusts will slowly diminish in intensity this weekend, they will remain around 40 mph on Saturday, the National Weather Service said. This will hamper the repair of power lines and tree removal. Travel is dangerous on the roads, especially for high profile vehicles, and downed trees and power lines are road hazards.

The storm underwent rapid strengthening as part of a process called “bombogenesis.” The storm apparently evolved into something shaped like – and as powerful as – a hurricane, creating what is known as a “bomb cyclone,” according to the National Weather Service.

Many downed trees and power lines are expected during the lengthy storm, which isn’t expected to decrease in strength until Sunday afternoon, when wind speeds should drop below 30 mph. The prolonged period of strong winds will knock down power lines and hamper the repair work by utility and tree crews. 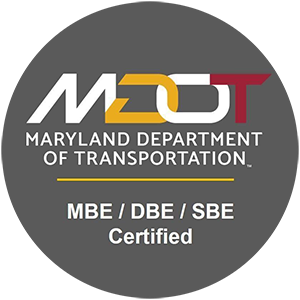 Headquartered in Bowie, MD, Titanium Restorations Inc. provides the same service and trusted commitment to every new customer that was provided to our very first customer. We have established ourselves as the top storm damage repair company in MD and D.C. and strive for a standard of excellence.